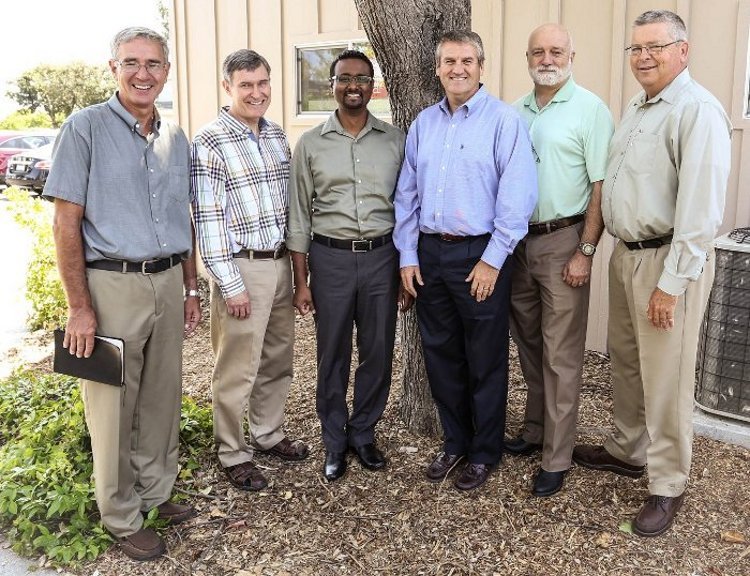 ELDERS' MISSION STATEMENT As elders we shall glorify God and show our love for Him by shepherding the flock of God among us, exercising oversight (John 21:15-17; 1 Peter 5:1-5). We shall proclaim the gospel and defend the truth (Matthew 28:19-20; Titus 1:9-11). We shall provide for "the equipping of the saints for the work of service, to the building up of the body of Christ" (Ephesians 4:12). We shall be on guard for ourselves and for all the flock for which the Holy Spirit has made us overseers, knowing that one day we shall give an account to the Chief Shepherd (Acts 20:17-35; Hebrews 13:17). We recognize this is a high calling, requiring men full of the Spirit and wisdom, possessing godly character (1 Timothy 3:1-7; Titus 1:5-9). By God's grace we shall be those men.

Steve came to know the Lord at Hillview Bible Chapel as a high school student in 1981. Six years later he married Vicky, whom he had met through a Bible Study at the church. Since then, Steve and Vicky have raised their two children, Eric and Suzanne, while serving together in home Bible Studies, high school & college ministries, marriage counseling, discipleship, and hospitality.
After graduating from San Jose State in 1986, Steve worked at Lockheed Martin as a budget analyst for thirteen years. Hillview commended him as an elder in 1998, and then asked Steve to serve full time as of 2000. Steve remains a faithful elder, preaching on Sundays, teaching in various adult Bible classes, and shepherding the flock through counseling, and discipling. He and Vicky recently resumed leading our SaltWorks College ministries. Besides serving the body at Hillview, Steve also coaches a local high school soccer team.

Rick was born in Woodland, California near Davis while his dad was going to veterinary school. Even after moving to the Bay Area, his interaction with animals and being part of a family that loved to be in the wilderness helped develop a deep and lasting love for nature and the wild. Nature gave solace and a place to think during the questioning 1960’s when he had to ask what made things right and wrong? Where did standards and even reality come from? Were relationships worth the pain? Was there evidence for a God? By 1971, in southern California, Rick came to the point where he accepted Jesus Christ as God and personal savior. Four years in the army, two years on the East Coast in Bible school, and a year in the Discipleship Intern Training Program at Fairhaven Bible Chapel brought him to Hillview Bible Chapel in 1979 to try and help the church grow. There he met Gail who had grown up at Hillview, and they were married in 1984. In 1987 he was commended to full time ministry at Hillview Bible Chapel. Through all the intervening years his conviction has only grown stronger that Jesus really is the answer to all those early questions, relationship issues and much more as well. Rick has been involved in Saltworks, the college ministry, his pastoral work, teaching, training, and planning. Currently, he is focusing on the development of the church training program, University of A.C.T.S., and church planting efforts. Rick and Gail have three adult children who love the Lord and are actively involved in the church with their spouses.

David and Beulah and their two boys, Steven and Isaac, have been in fellowship at Hillview since late 2007. David grew up in Tamil Nadu, South India in a family that serves the Lord Jesus. Not surprisingly, he is an ardent lover of spicy food and a crazy cricket fan (that is, the sport, not the insect!). As a single guy, David first came to the U.S. in 1999 to work as a mechanical engineer in the auto industry of Detroit, Michigan. He briefly returned to India in 2001 to marry Beulah, and together they settled back in Detroit.
The Lord led David to be part of Hillview’s Discipleship Intern Training Program, and brought the young family to San Jose, California in 2006. Upon his finishing the Program, David and Beulah felt called by the Lord to join in fellowship and serve at Hillview Bible Chapel. He was eventually commended to become an elder at Hillview in 2013. Apart from general shepherding and preaching, David has a special place in his heart for discipleship ministry and training. David is employed in the high tech industry in Silicon Valley. David enjoys traveling with his family, as well as playing soccer and tennis with his boys.

Dave was commended to the Lord by Hillview in 1985 to serve in the Philippines. Since then he has been involved in Bible teaching, discipleship training, church-planting, literature distribution, and medical assistance ministries there. After marrying Dave in 1995, Shelly was commended to the Lord in 1996 by Greenwood Hills Chapel in Fayetteville, Pennsylvania to join the work. They have three children: Grace, Luke, and Anna, who were all born in the Philippines. Due to health matters, the family returned to the U.S. in 2006 for an indefinite time. Dave continues to stay in touch with the assemblies they serve in the Philippines. He makes annual trips to encourage their Filipino brothers and sisters in the Lord and forward the work of teaching and serving in various assemblies throughout the Philippines. Dave serves concurrently as an elder here at Hillview, preaching, teaching adult Bible studies, and overseeing the Oasis ministry at West Valley College.

In 1986, John came to a saving knowledge of our Lord Jesus Christ and started walking daily with Him. While looking for a church which practices New Testament principles, John and Katie found Hillview Bible Chapel one Sunday in 1990 and have been in fellowship here ever since. Over the years, John has served in various ministries including time as a deacon and in 2009 was recognized as an elder. He is passionate about seeing others grow to be more Christ-like and is active in leading Bible studies, personal discipleship, and various forms of counseling—crisis, marriage, and family.
John and Katie have four children, and a growing number of grandchildren. Since 1992, John has been self-employed, serving the Bay Area as a plumbing and mechanical contractor and consultant. When not working at his job or serving the church family, John can be found outdoors to enjoy fishing, camping, and hunting; or in his garage with various woodworking projects.

David and Laura were both born in California, having lived in Cupertino nearly all their lives. David came to Christ as a youngster, and was challenged to a deeper commitment and walk with the Lord as a freshman in college. After completing a degree in electrical engineering at Cal Poly San Luis Obispo, he married Laura. God has blessed them with three kids, now fully grown. He currently works as an engineering manager at a local computer firm.
David strongly feels that yielding to God is one of the most important life lessons we can learn. He has a burden for preaching, teaching, and one-on-one discipleship. David also enjoys working with computers, fix-it jobs around the house, running in the mountains, and spending time with family.